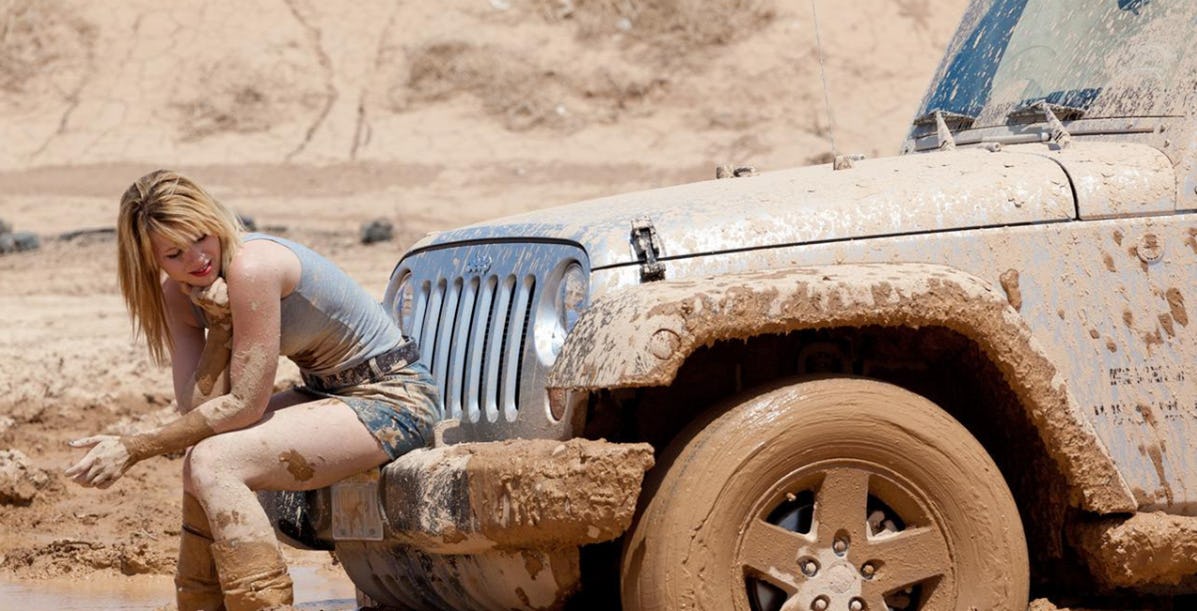 Hey Crawlers! I just read an article that was shared on social media from HotCars.com. “15 Things About Jeeps That Make No Sense“, and I just had to speak my mind. Now, we’ve all probably seen how Forbes hates the Wrangler. They listed it in the top 15 vehicles not to buy in 2015, and then regurgitated the same basic article again in 2019. JeepMomma had some feelings on both in her own articles, Forbes Reports JKU Cars to Avoid — WHAT!!! They Got it WRONG!, and Jeep Momma Fact Checks Forbes Article. Mainstream automotive media doesn’t really get the Wrangler, and it shows. True enthusiast outlets get it, they know the Wrangler is iconic BECAUSE it is what it is, Jeep gets that too, as we saw with the 2019 redesign. FCA really could have messed it up, but they didn’t, they knew they’d lose their base if they turned the Wrangler into another watered down cute-ute with a soft top. You’d think a site like “HotCars” would get that vehicles like the Wrangler have a following, and that’s what makes them. Then again, maybe they’re just here for the click-bait and ad revenue.

So first off, go give their “article” a read, I’ll wait….

So, the point they make here is that the Wrangler gets poor safety ratings. They’re not wrong. However, the Wrangler meets the US safety standards, otherwise it wouldn’t be for sale in the US. Yea, that’s the lowest possible bar I can set, but the point is, the safety ratings are there to set the lowest bar for a “safe” vehicle. Safety ratings above that are really just gravy. That said, you’re not going to get a ton of argument from me here. A safer Wrangler would benefit us all, but when we’re asking for a vehicle that has removable doors, windshield, and roof… It’s a pretty hard balance to strike.

If you are looking for a vehicle to take off-road, then the Jeep Wrangler has to be top of your shopping list when you start searching the local dealerships. However, there are plenty of motorists who buy jeeps even though they have no intention of ever leaving the highway.

As I mentioned above, the Wrangler is an enthusiasts vehicle, but it’s also a ridiculously fun vehicle to own and drive. Which, you might say, is the very thing that makes an enthusiasts vehicle. Saying it’s only for off-roaders though? Who are you to judge my wife for wanting a fun vehicle? Or Johnny down the street who just wants something that’s decent in the snow, can tow 2000 lbs, and can take the top off for a trip to the beach? The Wrangler is a jack of all trades, and that’s one of the reasons I love it.

13. But No Space For Luggage

Yes, the Wrangler is notorious for its lack of cargo space. However. Jeep finally answered our plight in 2004 when they unveiled the Jeep Wrangler Unlimited, which was a slightly longer Wrangler, focusing on the two pain points of the Wrangler. Rear passenger leg room, and cargo space. Then in 2007, they unveiled what we were all begging for, a 4-door Wrangler! The JK Unlimited (and now JL Unlimited) feature as much passenger and cargo area as most SUV’s on the market today, even more than some of the Cross-Overs.

After all, off-roaders like to take their camping gear with them, and stay off the beaten track for a few days at a time; something which is nigh on impossible with the tiny amount of trunk space you get on a Jeep.

Please Natasha, do some research before you try to speak for us. There are countless storage solutions for the Wrangler, which move cargo to the roof, tailgate, or a trailer. Many overlanders have chosen the Jeep Wrangler Unlimited as their platform of choice for its reliability, space, and capability.

12. No Side Mirrors If You Remove Doors

So…. Yea.. The mirrors are attached to the doors. Like every. other. vehicle. on the road. There are plenty of fixes for this. In many (maybe even most) places it’s not legal to remove the doors on the road anyway! In fact, let’s see what the 2019 Jeep Wrangler’s owners manual has to say about removing the doors…

Do not drive your vehicle on public roads with the doors removed as you will lose the protection they can provide. This procedure is furnished for use during off-road operation only.

Sorry, your argument is invalid, don’t take your doors off on the road, and off-road all your side mirrors do is catch trees.

Yea, I can’t argue with this one. The newer Wranglers are much better than the older ones, but certainly no economy vehicle. Us Wrangler enthusiasts exchange miles for smiles. FCA is working on fixing this problem with the JL though. With the diesel, and promised electric model, MPG is sure to improve.

Sadly, as owners of Jeep Wranglers throughout the years have discovered, they don’t have a lot of oomph when it comes to acceleration, with the 2018 Jeep Wrangler taking 7 seconds to accelerate from 0 to 60mph.

If you expect your Jeep to perform like a car, you’ll be disappointed. Period. The Jeep 4.0l which was killed off by harsher government economy standards was a torque monster. You want a good feel when you mash the accelerator, link that engine to a good gear ratio and a stout transmission. It’s still no racecar, but it’ll certainly get out of its own way. The 3.8, and 3.6 aren’t horrible, but I have no problem believing a 7 second 0-60.

As well as being an annoyance on the open road, this can also be problematic if you are trying to take your jeep off-roading, and need to power your way up some serious uphill slopes!

I’m sorry. This is bullshit.

9. Awkward To Get In And Out

The JK is no harder to get in and out of, stock, than any other SUV or Pickup. Sure, when you show Grandma trying to get into a lifted JK on.. what is that.. 35’s, it’s going to be a challenge. If you’re going to reach into the aftermarket to make your argument, you need to consider that the majority of the shortcomings that you’ve listed here also have aftermarket SOLUTIONS. Stop being biased Natasha.

Yep, Ragtops are noisey. I’ve never owned a convertible sedan, but I’d guess there’s wind noise. The Wrangler has the aerodynamics of a brick with a tent on top of it. And we love it that way. The JK, and aftermarket tops for the TJ and YJ all help the road noise problem, but the bottom line is, this isn’t the deciding factor for most Wrangler enthusiasts.

The rattling bodywork and dodgy suspension don’t just make the Jeep Wrangler a noisy car to drive; it also makes for an uncomfortable ride, especially if you are planning on taking your jeep on a long drive.

What exactly about the Jeep Wrangler’s suspension is unreliable, potentially dangerous, or of low quality? Whatever, the wrangler rides like an SUV should. Expecting it to ride like a car is silly.

Taking your side doors off a Jeep Wrangler, thereby losing your side mirrors, is bad enough, but when you combine that with the poor rear visibility that most jeeps have as standard, it isn’t difficult to see why these vehicles get such a poor safety rating.

Here we go with the mirror thing again.

Joking aside, the rear visibility on the Wrangler isn’t great. Point for HotCars.

When it comes to driving a jeep on the open road, it isn’t just the slow acceleration, noisy cabin and bumpy ride that can make it an unpopular choice with motorists – although those reasons should be more than enough to put off most people from splashing the cash on a vehicle which is clearly unsuited to the morning commute.
However, there is yet another flaw with the Jeep Wrangler which potential buyers need to take into consideration before they hand over their hard-earned cash, and that is the vehicle’s interminably slow steering, which can make responding to road conditions more difficult.

Ok, so first, “clearly unsuited to the morning commute”? Wrangler sales disagree with that statement.

And slow steering? I can’t say I understand what you’re saying here? My Wrangler steers just fine. Or are we singling out specifically the issues with the 2019 JL now? If that’s the case, yes, FCA is working on this complaint.

Brick with a tent.. Moving on.

3. Only Room For Four People

Have you seen the unlimited? Seats 5. Yea, not in luxury, but it will seat 5 adults, I’ve done it. It’ll do it just as well, or better, than your standard economy car, and have you looked at the truck market? Without a crew cab you’ll be lucky to seat 3! If you’re looking to seat 8 people comfortably, buy a mini-van!

2. Convertible Roof Is Not Insulated

Ok, first, I believe the Premium soft top option is technically insulated. Second, I’ve been driving soft top wranglers for 20 years. It’s not that bad. Jeep makes up for the EXPECTED loss of heat by putting a portal directly to hell in the heater box. It gets plenty toasty in there.

It may only be a small problem, but it is one that has been known to drive Jeep owners to distraction! Normally, when a motorist switches off their windscreen wipers, they only stop moving when they have returned to the bottom of the window.
However, for some strange reason, Jeep Wrangler windscreen wipers stop just where they happen to be when the driver flicks the off switch, even if that’s half-way up the windscreen.

I’m sorry, what? Who told you this? Were they trolling you? As mentioned, I’ve driven wranglers for 20 years. The first one I owned would be 30 years old now (1990 YJ). That thing was as far from civilized as any Wrangler gets. No wrangler I’ve ever owned, or witnessed, had this issue, unless it actually had a problem with its wipers. That is, to my knowledge, the Wrangler (1987+) was never designed with this limitation. Now, the CJ, is a different case, but if you’re going to complain about a shortcoming that was corrected over 30 years ago…

1 thought on “HotCars.com doesn’t get it – 15 Things About Jeeps That Make No Sense (rebuttal)”