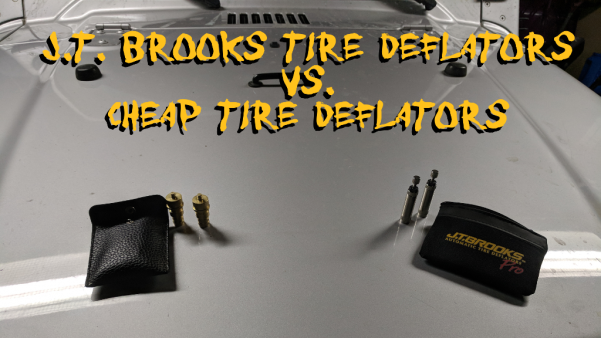 Hey folks, we’re just past Christmas, and one of the few SWBCrawler related gifts I received (aside from a really nice set to ratcheting wrenches) was a set of the J.T. Brooks Pro tire deflators.

Now, getting the air out of your tires seems easy enough right?  I did it manually for years, and then eventually bought a set of those brass generic tire deflators.  You know the kind, and if you don’t, you can see them in the video I’m linking below.  They were a great upgrade from manually deflating, but man, they’re in-accurate, and prone to failure.  By failure, I mean they’re really easy to accidentally re-set as you’re putting them on or off of your tire, because the set rings aren’t very secure.  I’ve lent mine to Jambroee participants, and more than once i’ve gotten them back in several pieces.

The J. T. Brooks Pro deflators though, are a nicer design, that makes it much harder to accidentally pull apart during normal use.  Have a look at the following video, and see what you think: